by Michael KlementsPosted on January 13, 2020

People living in apartments and more densely populated areas are facing increasing rules and regulations regarding what can be done common property and one their balconies. BBQs are a popular discussion point and the majority of apartment buildings already prohibit the use of coal and wood fires. Weber’s attempt at addressing some of these issues comes in the form of the Weber Pulse, an all-electric full size BBQ with their iGrill Bluetooth grill assistant built in.

The Weber Pulse comes in two models, the 1800W Pulse 1000 and the slightly larger 2200W Pulse 2000. The primary differences between the two being the size of the grilling surface and the fact that the 2000 has two independently controlled elements where the 1000 only has one. One other consideration is that the 2000 has four iGrill temperature probe inputs while the 1000 only has two.

The Weber Pulse is by no means an entry level BBQ. It may be a smaller sized BBQ and one of only a handful of all electric BBQs available but its price puts it quite high up the line-up.

There isn’t really a whole lot to set up with the Weber Pulse. It comes almost entirely assembled in the box and all that you need to do is put the grill in place, push in the front control panel and you’re ready to go. The Pulse grill is sold separately to the cart, so if you’ve got an outdoor bench, work surface or table then you’ll be good to go with the Pulse only. If you’re look for a free standing BBQ or a little mobility, then you’ll want to get the cart as well. The Pulse has a really good quality, premium feel to it. It is heavy for it’s size and this is largely due to the construction being a combination of thick cast iron and aluminium with a premium porcelain-enamelled cast iron grill. The handles and legs are plastic but they also have a heavy duty, sturdy feel. The cart, unlike the grill, comes flat packed and is in a number of pieces. You’ll need to set aside around 15-30 minutes to assemble it and you’ll need a screwdriver to get the job done. The instructions are well documented and clearly marked, also pointing out any commonly made assembly mistakes and things to look out for. The cart is mostly made from plastic, it has plastic legs and supports with stainless steel accents. The detachable side table slips in an out of place using stainless steel pegs into stainless steel slots to prevent wear. There are some cleverly thought out additions like the hooks on the front to hang your Weber grill tools, a shelf on the bottom for storage of accessories, a cable holder on the bottom to storage your extension cable and the removable side table making it more compact for storage. The only part of the cart which feels a bit flimsy are the wheels. They are entirely plastic and rattle around a bit when you move the cart, I feel like they would have felt a bit more like the rest of the BBQ if the hub was steel and perhaps incorporated a bearing or two. 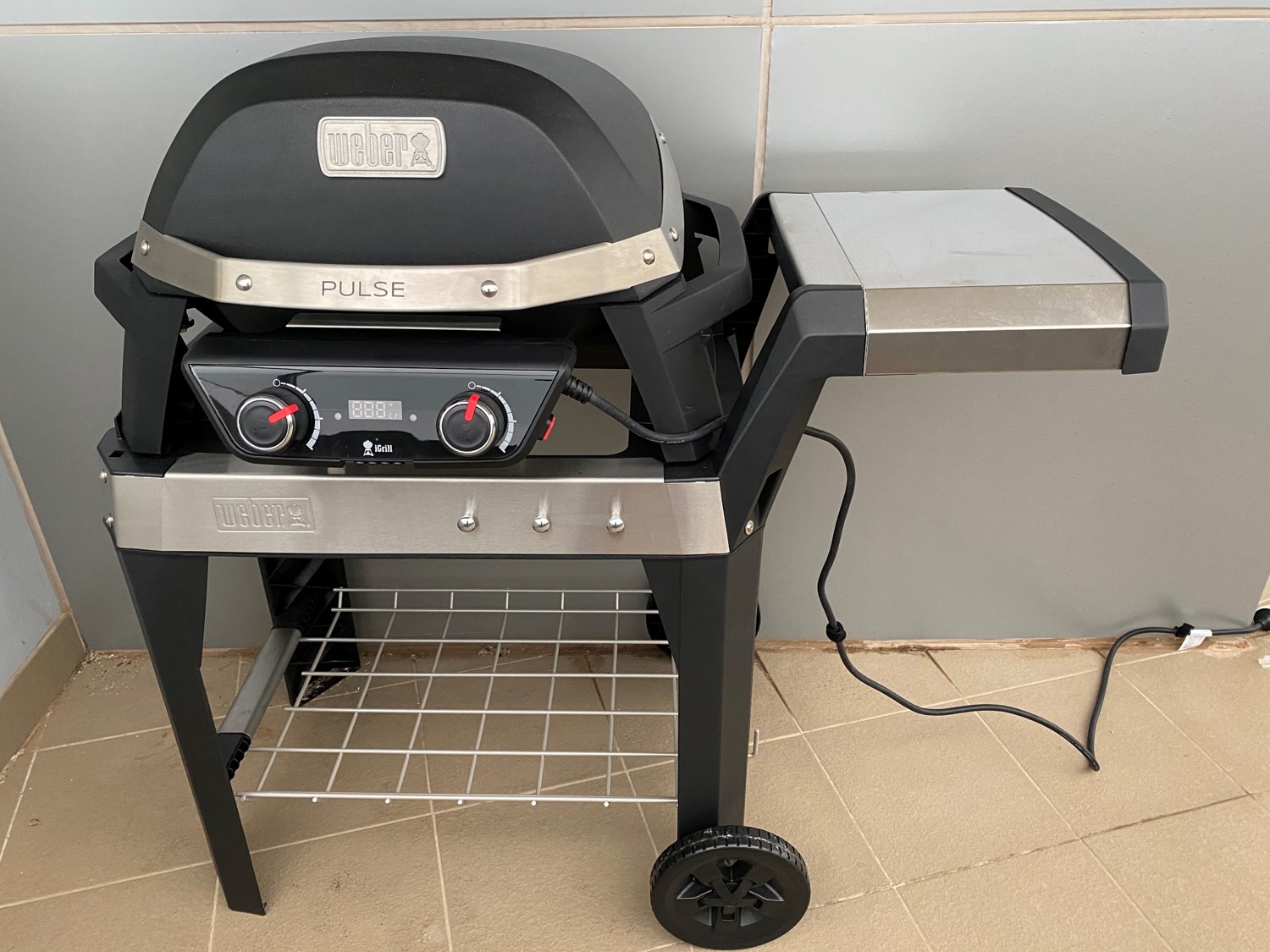 The Weber iGrill temperature monitoring system and app is the Pulse’s party trick and while you don’t have to use it to use the BBQ, it definitely helps with getting your meat cooked to your liking, even more so when you have people wanting their meat done differently, and it’s even better for larger roasts. The system uses up to four connected temperature probes (two on the Pulse 1000) to monitor the internal temperature of the meat on the grill and can be set up against a range of presets for different meats and likings to ensure that each is cooked to perfection.

It is available for download for free from the App Store and on Google Play, making it compatible with the majority of smartphones.

The app automatically detects any nearby iGrill devices and after asking you to confirm your BBQ, it paired pretty quickly with mine. It then provides you with a temperature reading for the inside of your BBQ as well as a graph for each of your systems available probe inputs.

It seems to be pretty comprehensive for meat, allowing you to choose from an extensive range of cuts for red meat, pork, poultry, lamb and fish. There aren’t any vegetarian options, and while I’m not really one for throwing veggies onto the grill, there certainly would have been some opportunity to put commonly grilled veggies onto the list, things like sweet potato, butternut, corn etc. could have been a nice addition.

You can set up different meats, cuts or temperatures for each probe and they’ll be loaded into the temperature screen which then allows you to monitor the cooking process for each individually. You’ll get alerts through the app, even if your phone is locked, which notify you when your meat is almost done and then again when it is done, for each probe.

You can also just view the BBQ and probe temperatures without setting up any alerts.

Some other features of the iGrill app include customisable timers and alerts, grill advice and recipes and a full log (history) of your previous grill sessions.

How Well Can You Cook A Steak?

So now it’s time to try it out and see whether the BBQ can produce the wonderful smoky flavour that comes from cooking over traditional coals or gas and whether the iGrill app can help us to cook it to our liking.

To start off, you’ll need to plug the grill in and power it up by pushing the power button on the side of the control panel. The panel beeps and then displays the internal temperature of the BBQ. We then turned the two control dials to maximum and closed the lid to allow the grill to preheat, recommended in the Pulse manual and on all of Weber’s other BBQs we’ve used. You’ll want to preheat to at least 260°C (500°F) but we wanted to get it extra hot for steak and ensure that the meat doesn’t stick to the grill. We stuck a temperature probe into one of the steaks as they were both similar sizes, thicknesses and we both like our steak done a little over rare. Once our grill had been preheated, I placed the steaks onto the grill above the now glowing elements, lightly seasoned them and closed the lid to trap the smoke and give the meat an extra smoky flavour. Weber recommends keeping the lid closed while grilling to keep the heat in and to develop a more full-bodied flavour.

While the 2200W element is more than adequate to get your BBQ hot and steak sizzling, the temperature does drop off quite quickly if there is any wind blowing over it. Just something to keep in mind if you’ve got a full grill and you find yourself turning meat quite often.

After just under a minute, the steak was halfway to its target temperature, so I decided to flip them over. The hot cast-iron grill had left perfect caramelised grill lines on the steak and they came off the grill effortlessly, no sticking at all. After another 30 seconds or so my phone buzzed and the Pulse’s Control Panel beeped to tell me that probe one had reach its target temperature and that my steak was done. I left them on for a couple more seconds to get them a little over rare.

The steaks certainly looked good off the grill, let’s see what they look like inside. The steak was impressively well cooked, especially for its thickness. It’s quite difficult to get a really thin or really thick cut of meat cooked perfectly and this was as close to perfection as you could get and literally spent less than two minutes cooking. The taste was also great. The smoky flavour is definitely not as fully developed as you’d get from cooking over coals but it’s definitely comparable to gas and far better than any steak I’ve had out of a pan or skillet.

The Weber has really been well designed when it comes to cleaning. The grill is made in two halves, making it really easy to clean in a smaller apartment sink or even to put into the dishwasher. There is also a standard drip tray underneath the main body with a throw away foil tray. You’ll want to give your Pulse a wipe down with a damp cloth once it’s cool and that’s it for your everyday cleaning.

To give your Weber Pulse a deeper clean, the element is removable with a single screw, and this allows you to remove the entire aluminium heat deflector to give it a proper scrub, use some of Webers BBQ Cleaner as a proper de-greaser to make it easier to clean. The one in the lid is also removable with four screws.

The front control panel simply slides out again and can be stored inside if you don’t have a cover for your BBQ and are worried about it getting wet.

As with most of Weber’s other BBQs, they have a wide range of accessories to assist you in cooking, cleaning and expanding on the versatility of your BBQ.

The most obvious ones are probably the fitted cover which protects your grill and cart from the sun and rain as well as the grilling tools and grill cleaning brush.

The Pulse 1000 comes with a single temperature probe and two inputs, the Pulse 2000 comes with two probes and four inputs, so you’ll probably want to get an extra probe or two down the line. I’d also imagine that they may eventually break. Don’t get me wrong, they are well made and the lead is fairly well protected with a breaded steel outer sheath but the weak points are always the connections between the lead and the plug or probe itself which eventually fail.

They also sell a range of cleaning products, a pizza stone to make your favourite pizza in your Pulse and a rotisserie attachment similar to the ones available for the Baby Q range.

Final Say – Should You Get One?

If you live in an apartment or a heavily regulated area then this is definitely a BBQ to consider getting. Like any Weber product, it is good quality and really well made, it’s also easy to use and clean and because there isn’t any actual fire used for cooking, it’s a really safe option as well.

The biggest reason not to get the Pulse is the price. While it is well made and will probably last for a number of years, you’ll still have to part with between $500 and $1000 to get one, depending on the model and accessories you choose to get and there are definitely some better gas and coal options for this price range.

But if you’re prohibited from using coal fires or you don’t want the hassle of carrying, storing and exchanging gas bottles then the Weber Pulse is a fantastic all electric option which yields cooking results as good as gas without any of the hassles or safety concerns. Have you tried cooking on a Weber Pulse? Let us know in the comments section below, we’d love to hear your experiences, tips and tricks.

Hi, my name is Michael and I started this blog in 2016 to share my DIY journey with you. I love tinkering with electronics, making, fixing, and building – I’m always looking for new projects and exciting DIY ideas. If you do too, grab a cup of coffee and settle in, I’m happy to have you here.

6 Replies to “Can You Cook The Perfect Steak On An Electric BBQ? Weber Pulse Review”